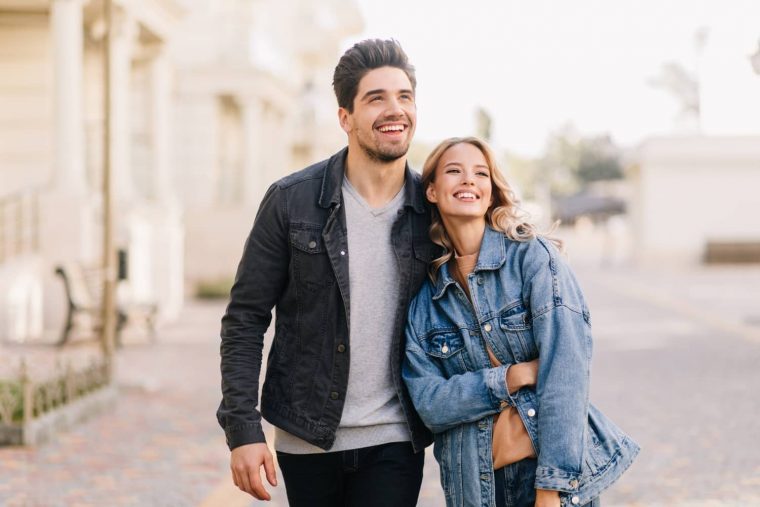 Leo men get all the attention wherever they go. They’re charismatic and very good looking. Many women want a Leo guy because he feels warm and inspiring.

But, how can you get him to pay attention to you? I’m here to teach you exactly how to get a Leo man to ask you out on a date. Keep reading, take notes, and you’ll have your sunny, confident guy in no time!

Stand Out With Confidence

Leo men don’t tend to gravitate toward “wallflowers.” He likes women who are confident and secure in themselves. This is what you have to show him to pique his interest.

Dress your best, smell fantastic, and be social. If this isn’t how you normally are then you’re going to have to pretend just enough to get him to ask you out.

Once he gets to know your inner beauty matches your outer beauty, then the social part may not be as important. You have to get him to engage with you, so put in the work!

Talk to people around you, don’t give him all your energy, and be a bit mysterious. Look him in the eye when you can but don’t go talk to him yet. You’re basically luring him in with that “come hither” look. Yes, it really works!

A Leo man wants to be the one doing the chasing. You’re the gazelle and he’s the Lion. Let him some to you once he sets his sights on you.

He loves the thrill of the hunt for a woman who doesn’t play easy to get. Flirt with him but do not ask him about going out together or anything like that.

Just let on that you find him attraction then go browse the room or talk to your friends. This will definitely have him thinking about you!

If you’re in an office setting, you can kind of do the same thing. As far as online goes, you flirt and then go quiet… rinse and repeat.

Show Off Your Wit & Humor 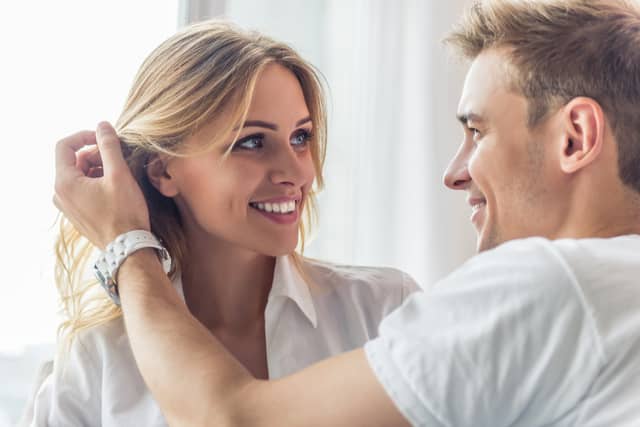 Alright, not everyone has the best sense of humor when it comes to dishing out jokes. I totally get where you are coming from but even if you watch some comedy videos and talk about that, you’re in!

Again, if it’s not in your nature then watch some videos and test it out. You only need to do this just get Leo man to ask you out on a date.

Once he’s asked and you go on the date, then you can be yourself. It’s completely acceptable because he definitely needs to get to know the real you so just snag that date!

Intelligence Is A Turn-On 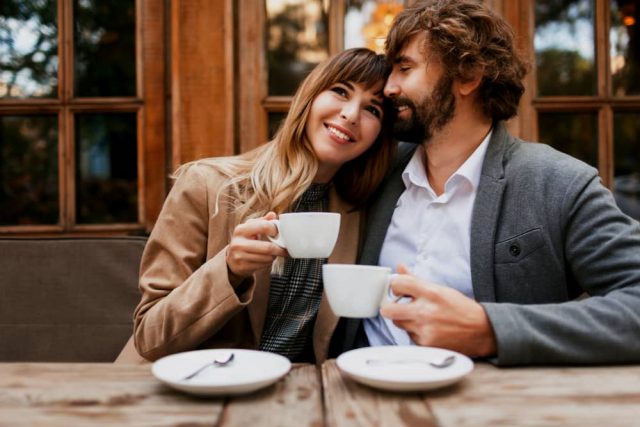 Leo men LOVE smart women. Beauty and Brains makes him weak in the knees! Beauty without any content on the inside turns him off. He may be up for sex but that’s about it.

When you’re trying to impress him so that he will ask you out, you’ve got to let him know you are smart!

When you get the chance to talk to him, talk about something mainstream that you’ve learned by research or by paying close attention to the news. He will be impressed.

This is especially true if you can form a very intelligent opinion about what you’re seeing.

Do some recon of your own. Ask his friends or anyone that knows him what he’s really into and then bone up on that. Read books, watch videos, and learn. It’s just a temporary thing so you don’t have to stay interested in it.

You’re trying to really capture his adventurous side. You can talk about travel and adventures you’ve had. He’ll find this exciting and want to get to know you better.

Stand Up For Yourself 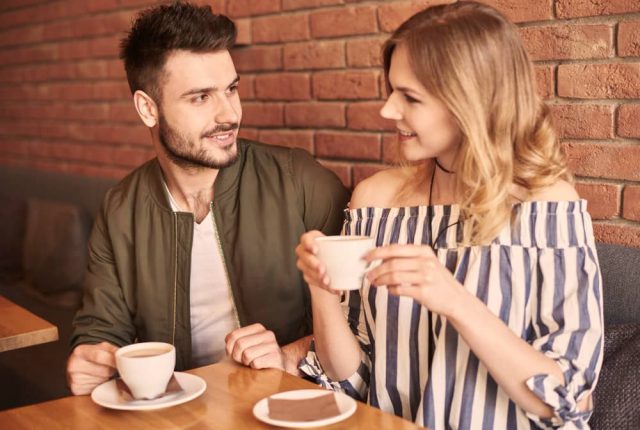 When you’re talking to a Leo man with hope that he’ll ask you out, you have to be honest with your opinions and beliefs.

He loves women who are strong enough to stand for their convictions. He Leo loves a woman with her own opinion and ability to give him a good debate (not fight).

The thing is when you’re debating, do NOT get angry. If you feel yourself getting that way then you need to stop and take a breather. He doesn’t want drama.

If you aren’t good at debating then hold off on doing that. You can still stand by what you believe in without arguing. Just tell him, “we can agree to disagree.”

This shows him that you’re a woman that can handle herself and you don’t let anyone run over you. That’s really attractive to Leo guys.

Don’t back down though. You don’t have to argue in order to make sure that your point gets across. If you back down, he’ll see you as weak and that’s something he doesn’t like.

Give him class, maturity, and decisiveness. Your Leo man will love it. It shows him that you can keep up with him in life and that you’re strong enough for him. He needs that in a woman.

Impress Him With Your Independence

To put it in simple terms, Leo men do not like clingy or needy women. When you’re talking to him or trying to impress him, talk about your independent adventures.

Talk about how busy you are and how much you love your life. That optimistic approach will absolutely get him interested in getting to know you better.

You can mention going to the gym then going to hang out with your friends or study for an upcoming exam. Whatever it is you have going on, share that with him.

Mentioning your personal successes to him will turn him on. He wants a really confident woman that goes for her goals. Whether that’s your career OR your life’s dream, he’s in.

Whatever it is, the dedication will show him that you’re loyal to what you love which would include him. That inspires him to want to talk to you more which leads to your Leo man asking you out on a date.

Do what you can to stand out including giving him a sexy look and then going off on your own or away from him if you’re in a social setting. He wants the woman who isn’t pining over him.

Leo does love some attention and it’s something he’ll chase you and work for it. This is why it’s important you don’t follow him like the other women tend to.

Do not laugh at jokes you don’t find funny and don’t dumb yourself down for him. Some of the women trying to chase him will do this. Instead, carry yourself with class and dignity.

Try to dress the part as well. You can look sexy without looking trashy. Wear something semi-revealing because you want to leave the rest of you as a mystery.

Make him work for it like he really wants to do. You’re far more exciting than the other women that are fawning and trying to please him.

You can please him later when you actually get that date. Until then, you’ll want to act sort of aloof in a way. It’s like you’re doing a sort of dance with him.

You’re stepping forward to let him know you’re interested then you step back so that he can now step forward. Does that make sense?

Get his attention and then wait for him to take it from there. Trust me, if you do everything that I mentioned for you to do here, he will approach you and most likely ask you on a date!

If you’re only able to talk to him via social media or text because of distance; you can still do the dance. Express interest and then wait until he makes the next move.

Send a classy, sexy photo. You want to make him want to see what you’ve got to offer without giving it all to him up front. Send him a nice pic and then back off to wait to see what he does with it.

With talking to him, you want to talk about his interests and your interests. Talk about anything and everything you can but DO NOT tell him all about you.

Leave some mystery there so that he stays interested enough to want to plan a trip to see you or have you come see him. That counts as a date by the way!

Are you still struggling in love? Are you at your wits end and looking for ways to improve your chances at finding your forever love? Then it might be a good idea for you to try something different.

I have a new VIP offering on my website. I think you might find it really valuable and it will 100% transform your love life into something magical. What are you waiting for? Let me help you get the love life you have always dreamed of!

I wish you all the luck in the Universe.

How To Have A Healthy Relationship With A Leo Man

4 Ways To Develop A Deeper Bond With Your Leo Man