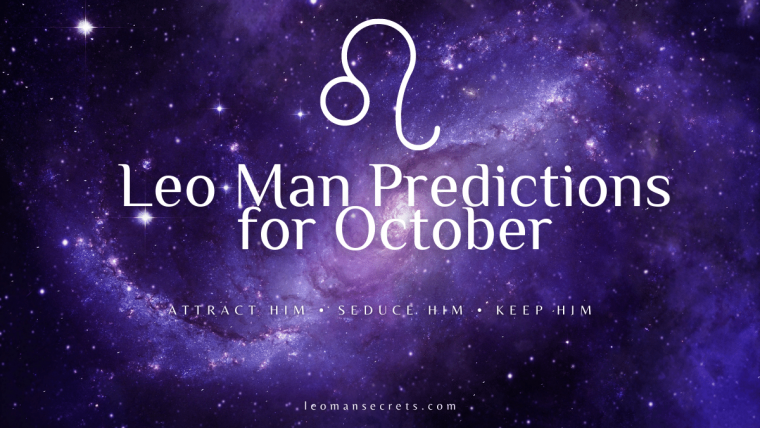 Hello, dear readers! How are you? Great, strong, powerful, and shining bright like a diamond, I hope, for we’ve new predictions and all you need to do is strap in and let’s go!

The first week of October puts focus on the past partnerships (in both business and romantic sense), and the Leo man will, despite wanting to be fabulous and seen in public, be forced to revisit his previous mistakes and bumps on the road to greatness. It is a great time for dates and driving around, but it is not a great time for new beginnings and starting something fresh before the old project has ended.

The second week brings forth a feisty Full Moon in Aries that will occupy the Leo man’s ninth house of philosophy, belief systems, and religion. Now is a good time for the Leo man to take a break and be on his own, as well as to be extra careful around traffic. It’s not a good time to settle verbal or philosophical scores, nor to get into hypothetical arguments.

The third week of the month is designed for rest and recuperation for the Leo man. Now is not the time to be in the center of attention, nor to gain public exposure. Instead, this is the time for intimacy, coziness, and autumn vibes spent either next to the fireplace or out in the open waters.

The final week of October provides a valuable glimpse into this past and possible future concerning the Leo man’s home and family life. This is a very good time (and place) to meet his family and loved ones, spend time in his home, and observe the inner workings that have shaped him into the man that he is today…

Mirror, Mirror, On The Wall…

The first week of October puts the Leo man in a chatty mood; he’ll text, he’ll flirt, and he might even call you out on a date where you can be seen in his bright-colored car and favorite café. He feels good and confident, and he wants to share that confidence and feeling good with his lover or partner, and others who might gaze upon his majesty wherever he shows up.

The accent is also on his love and business partners during this transit. He will have to attend a lot of meetings (whether for business or pleasure or both), and he will get a lot of public exposure at this time.

However, since both Saturn and Uranus are Retrograde now, it’s more likely that those meetings will include revisiting something from the past, rather than moving forward or in a new direction.

The same can be said for his love life – now is not the time for him to start anything new, but rather focus on what has been and figure out the bumps from the past that prevented him from living his best life.

A Feisty Full Moon In Aries

During the second week of October, the Leo man’s focus will be on his religion, beliefs, and life philosophy as there’s a Full Moon taking place in feisty Aries, and his ninth house. There is also an opposition between the Sun and Venus in his third house, so extra vigilance in traffic and driving is advised.

The Leo man will want everyone to agree with him and his attitude during this point in time. He will be prone to starting verbal fights and expressing his will and mind with the iron fist in the velvet glove.

Now is not a good time to challenge his beliefs, or to be a smart aleck around him. It’s a perfect time to just let him be and let him cool his head off. He, as a fire dominant, needs to be able to let go of some steam right now, but he also needs to pay closer attention to his body and his surroundings.

The third week of October will do him good, as the lunar transit will bring about a time of peace and quiet for the Leo man. He will have the chance to properly cool his head off and reorganize his inner structures in order to adapt to the new beliefs and systems he has put in place.

Now is a good time to be together, virtually and telepathically. If you opt to spend time together in person, then it’s best to stay clear of big social occasions and open spaces, and rather spend that time in a cozy environment and in a mountain of pillows and blankets.

It’s a perfect time to build a pillow fortress together, sit on the porch, and chill – enjoy the autumn atmosphere and fresh air and yet have some privacy and peace for yourselves.

It’s also a good time to journal and write a dream diary, and if the chance allows, go out on a boat or a glider and let the work do its inner magic. This week is a period of dreams, intuition, and emotions that flow like a river – free and in their own natural course.

Read also: How to Keep a Leo Man Hooked

The final week of October puts the spotlight back on the Leo man and his majestic self. This is the time to focus on what is good for him and his wallet.

It’s also the time of the big New Moon Eclipse in Scorpio, which takes place in his fourth house, and this means that he has the opportunity to start something new and to build with his loved ones.

It’s a perfect time to start a family business that has been in the back of his head for a long while. It’s also a great time for intimate family gatherings and secret suppers that will make for the forging of future plans.

Now is a good time for meeting his family and loved ones, and for spending quality time getting to know his familial background and seeing how he was raised, as well.

This New Moon Eclipse can be an eye-opener when it comes to the Leo man and his current behavior patterns, keep that in mind when you go into the fourth week of October.

There you have it, my darlings, how do you like them apples? October is shaping to be a fun month for the Leo man, with lots of ups and downs that are good for his character development and the reshaping of his ego, won’t you agree?

His mood will, for the most part, be in high spirits, except around the Full Moon in Aries, when he might be prone to bursts of anger and violent verbal arcades with those who would oppose his beliefs and attitudes.

October offers a great opportunity in the form of the New Moon in Scorpio during the final week, as it provides a valuable chance to see the more intimate and secluded side of him that not many people had the chance to witness.

I recently wrote an article about a Leo man’s texting style. You might want to give it a look before November approaches, it’ll help you ease through the challenging periods or misunderstandings. Trust me on this one.

All the love and happiness in the world.