December 29th, 2022
Monthly January predictions for your Leo man. Check out the first monthly predictions of 2023! How is January going to treat him? 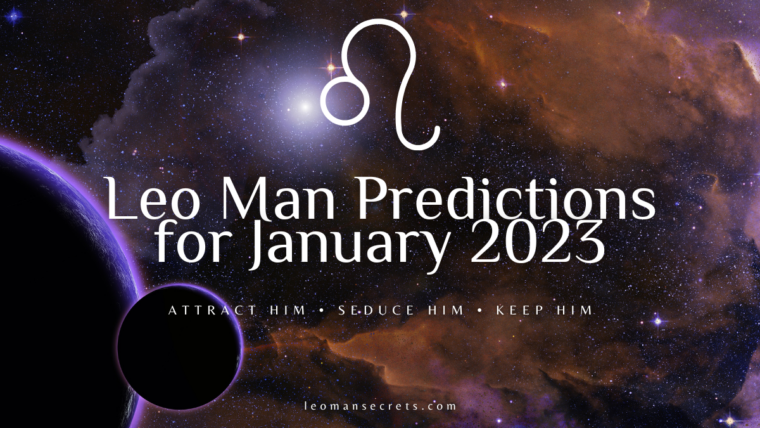 Hello, my queens, how are you and how majestic was the big night of the New Year? Tell me all about it in the comments, and don’t forget to mention your wishes and desires for the new 2023, but before we get to that, let’s dive into the Leo man’s forecast for January.

The first week of the first month offers a lot of action for the Leo man; he’ll be on a constant high, and his words might sting, but he has a good heart behind them. He might get into a bit of trouble with the boys, so if your gut tells you something’s wrong, it’ll be best to check up on him.

The second week might have his panties in a bunch, so it’s a good time to remind him to be careful how he handles iron in the gym and to let him play around a bit more in order to cure his insomnia.

The third week of January, although hazardous for his health and general daily activities, doesn’t stop him from being “in the mood.” So, you can expect either frequent booty calls, or you can take matters into your own hands and take him out on some fun and adventurous dates.

The fourth week offers the hall of pleasure for his lover or partner, and all the attention will be on you! This is a great week to feel the full extent of Leo’s power pampering and spoiling you. Go with the flow and enjoy the gifts. 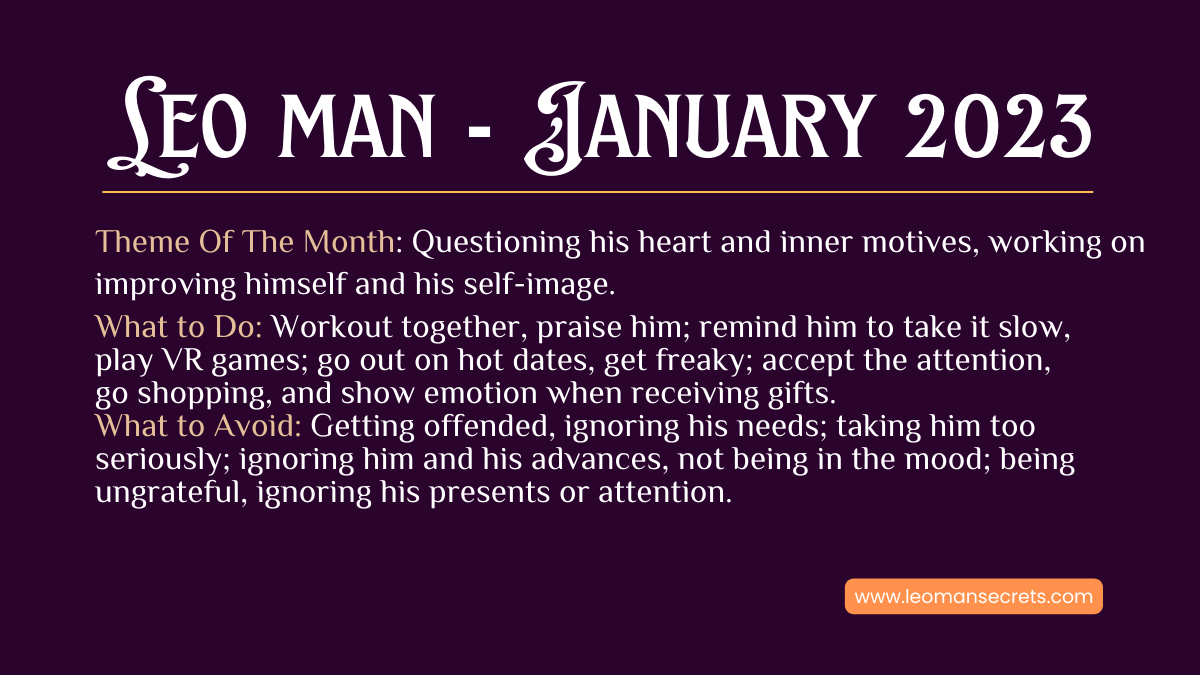 Theme Of The Month: Questioning his heart and inner motives, working on improving himself and his self-image.

Magic Phrase: Babe you’re looking smoking hot, let’s get naked and dance under the Moonlight together.

Text Magic: You’ve got this, you can do it, nobody’s as strong or as handsome as you. Go, go (my favorite) power ranger!

What to Do: Workout together, praise him; remind him to take it slow, play VR games; go out on hot dates, get freaky; accept the attention, go shopping, and show emotion when receiving gifts.

What to Avoid: Getting offended, ignoring his needs; taking him too seriously; ignoring him and his advances, not being in the mood; being ungrateful, ignoring his presents or attention.

I Am The Captain Now

During the first week of January, the Leo man’s focus will be on his daily routine, job, and fitness. He’ll be self-conscious about the extra weight he gathered around the holidays, and he’ll want to feel sexy again. So, it’s a good chance to praise him (more) and to be a kind support for his ego while he’s pumping it at the gym.

Don’t feel surprised or insulted if he brings up your beauty or fitness level too. He’s now focused on improving himself, and improving his better half is one of the ways he shows he cares. The only thing is, he won’t have much tact or sugarcoating at his disposal, so his words or advice might come off as rubbing it in, instead of wishing you well.

His social life will be quite lively during this time, alas, it might not be all bees and roses thanks to Mars being Retrograde in his eleventh house. He might restart some old feuds, or get into trouble with his peers.

Conversely, he might even get into collective trouble with his friends because they were out and about, doing their fire-dominant charades and they got caught red-handed. It’s a very fertile time of the month for socially dicey situations that can swiftly turn into altercations.

The Full Moon Bruised My Ego

The second week starts off with a Full Moon in Cancer, in the Leo man’s twelfth house, and he will be in a sleepless mood. His insomnia will play strong tricks on him, and he won’t be able to calm down. Thus, this is a good moment to go for a massage or play VR games.

He’ll need to take his mind off the scary things, and his body will be restless. This is why the gym might be a perfect solution for him right now. He just needs to be careful not to drop a heavy weight on his foot, or find some other, more creative (and theatrical) way to injure himself.

This is a good time for him to delve a little deeper and question how far his need for attention goes, and how (un)healthy it is. Now might be your turn not to sugarcoat your advice, and to spill his metaphorical guts like you did the beans last week when you shared the gossip with him.

As the week progresses, he’ll feel the Lunar light shine onto him, and that will be a good time to cut him some slack and show him some grace in order to make him feel less self-conscious and more pleasant about himself.

The third week might be really harsh for his health and it might influence his daily routines, thanks to the Pluto-Sun conjunction in his sixth house. After all, the Sun is the ruler of his entire chart, and getting into the ring with Pluto is not a dandy sign.

He might experience headaches during this week, and an under-the-weather mood. If that is the case, then make sure to make some homemade chicken soup for him, and tend to his needs if you’re unable to be there with him physically, make sure you’re frequently checking up on him via messages.

Despite all the possible complications, he’ll be in the mood for some frisky nights and breaking hot sweat with you, so don’t be surprised if you get a booty call from him in the middle of the night, he’s just that into you.

Now is a great time to flirt with him, and (if he’s capable) call him out on an adventurous date; go do something “extreme” together, and enjoy the creative adrenaline high that both the activity and your hormones will give you.

The fourth week blasts off with a Super New Moon in Aquarius, and this wild party takes place in his seventh house, which means that YOU will be the star of the party. His energy, focus, and emotion will all go toward you, and now (the 21st) is the perfect date to start something deeper and more long-lasting together.

Since Mercury has turned direct, his words won’t be rugged and bitter anymore. Instead, his advice and pragmatic thinking will give way to practicality and good wisdom when it comes to daily costs and finances.

He is on a roll this week, and the gratitude will go to you. His entire focus will be on his lover or partner (you) this week, and he’ll want to pamper you, so be prepared to go shopping or receive a lot of gifts you didn’t know you wanted.

This is a perfect time to get more serious about each other and to delve deeper into each other’s memories and emotions. The Leo man will be in a festive and cheerful mood, and he won’t even mind that you’re getting most of the attention, rather than him. This is a good week for romantic and emotional development, so enjoy it!

There you have it, queens, the Leo man’s forecast in a nutshell. It’s always a wild ride with him, but this January offers a little extra on the adrenaline side. Roll with the flow, make him feel seen and appreciated and that’s half the work done.

His mood will be pretty frisky and positive throughout most of the month, and he’ll be quite active and unable to sit down, unless he is forced to, which might happen around the third week, right before the New Moon when there’s a dicey conjunction between the Sun and Pluto. Take good care of him.

These planetary transits will play with his subconscious, and he won’t even be able to grasp why he’s suddenly feeling different.

That’s why you need to understand what’s happening inside of him and know how to position yourself through the different phases your Leo man will go through in 2023.

When you align with his subconscious needs, he’ll have no other option but see you as the only woman that ever got him.

Want to be the only woman he ever needed? In his most challenging, but also in his most fun and beneficial times?

Then make sure you go ahead and grab the opportunity to prepare for 2023 on time. Check what I’ve prepared for you in the link below.

–> Make Your Bond With Leo Man Stronger Than Ever in 2023

Stay creative, free of mind, and free of spirit. Until next time, my darlings.