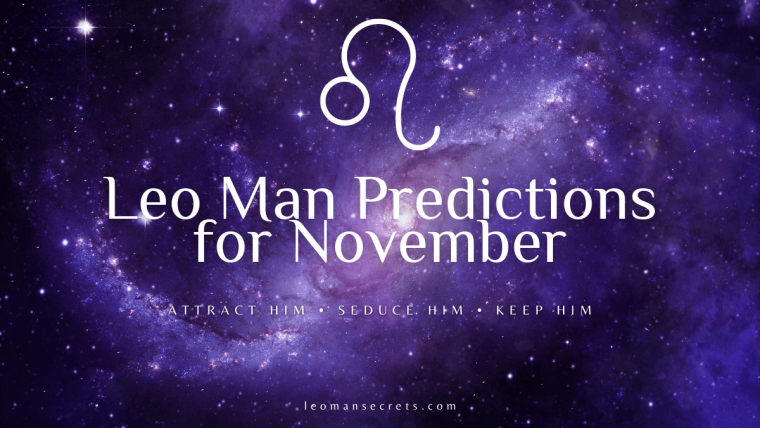 Hello darlings, how are you? I hope you didn’t let October shake the crown on your head with its pesky Retrogrades, and you are now ready for the November predictions.

The first week of November brings emotional maturity and depth for the Leo man; he’s very sensitive to women and their aches during this week, so it’s the right time to have an in-depth and intimate conversation with him about your heart and feelings. If the fates have decided it so, be there for him in his days of mourning for the matriarch of his family…

The second week of November holds the Full Moon Eclipse in Taurus, in the Leo man’s tenth house of career, public life, and reputation. This could be a very trying time for the Leo man, so he’ll need every ounce of support he can get. This week is also a time of intense intimacy and passion, so see how you can mix and match the two…

The third week is an excellent time to let the Leo man have the spotlight for himself and to indulge in his whims and wishes. It’s also a great time to make special and romantic plans for the upcoming week; his mood will lift and will be slightly brighter this week, so look forward to that.

The fourth and final week brings a powerful uplift in the general mood, thanks to the New Moon in Sagittarius on the 23rd. But more than that, it brings good times and a lot of fun to the Leo man who needs it sorely. Now is a perfect time to execute all those dating and romantic plans you’ve been brewing the past week, and let your hair down – go, and have some hard-earned fun!

During the first week of the month, the Leo man will empathize with women much more than usual, thanks to Lilith on his Ascendant, and the Sun in Scorpio in the fourth house, the house of the matriarch. His feelings are going to be very ‘watery,’ and his eyes will be filled with tears most of the time.

This doesn’t mean that he’ll be sad and mopey, just that it’s a perfect time to either get to know his mother or simply have deep and meaningful conversations about the feminine side of the story within the relationship.

He is extra sensitive to your wants and needs right now, and if you had something you haven’t told him yet or something so heavy you feared telling him – now is the right time and your chance to get a load off your chest, as well as bag his understanding and empathy.

If he happens to be involved in an inheritance case during this week, your support and comfort will mean much to him, and he will not forget your presence during this period. Remember that.

At the start of the second week of November, there’s a mighty Full Moon Eclipse in Taurus which will affect his career and public life. Since the Moon will pass over both the North Node and Uranus Retrograde, you can expect some heavy and unexpected bolts of destiny to take place in this area of his life.

The Leo man might be shaken (on top of everything else) during this time, so it’s a good idea to keep him company and be by his side through these trying times. He will be extremely emotional during this time, which is unlike him, and he’ll try to pack it all in and push it down, but that’s not good.

There’s a way to get him to open up during this Eclipse season, and that is by being there for him, being patient with him, and being kind. He’ll sense warmth in you if you play your cards right, and he’ll open up.

It’s a good time for intense intimacy, and bonding through passion and sex; violent ends require violent delights in order for them to be overcome… Keep your wits about you, and don’t lean heavily on subjectivity; at least one of the two of you needs to be pragmatic and objective when it comes to decision-making during this week.

What Comes Up, Must Come Down

The third week of November brings a slight clearing of the serious clouds that loom over the Leo man’s head. This is a good time to let him have the spotlight (as if he ever stops) and to focus on his desires and needs in the spirit of brightening him up.

This is, at the same time, a week of endings. Now is the right time to let go and let the river flow. This could be important as the Leo man says goodbye to an important woman in his life. Since there’s a positive aspect between Jupiter and Venus, it could be sending off his daughter to college, or it could be saying goodbye to his long-lost first love.

Either way, this week serves as a reminder that the Universe is completely objective, and what goes up must come down, and vice versa – what was down, now must come up. No state is eternal, and all is forever changeable, which falls hard for a Fixed (and Fire) sign like Leo.

This week is a good time to make plans for dates and romantic times that are coming up next week. This is a good time for “cleaning out the closet” and for releasing the skeletons lying in the ground, mark my words…

When the fourth week comes, the Leo guy will turn into a different man. You might struggle to recognize him, for the shift in his mood will be great! His ruler (the Sun), along with Venus and Mercury all move into his fifth house of fun, pleasure, and romance, and Sagittarius – the sign of humor and adventure.

It’s only natural that the Leo man’s mood will shift to greener pastures and more pleasant themes. His head will get out of the dark and damp crevices that belong to the Scorpio realm, and he will feel lighter and more romanceable and optimistic.

On the 23rd of November there’s a nice New Moon in Sagittarius, taking place in his fifth house, and now is a perfect time to execute all those meticulously planned dates and romantic adventures. The stellar energy supports this kind of scene and vibration, so go forth and have all the fun in the world.

The Leo man needs this strong uplifting energy after all the doom and gloom he’s been through, and this will come so very nicely as a positive change. Go on short trips, have a date at a bizarre entertainment park, hold hands as you watch a meteor shower, or have a nostalgic slasher marathon at home or at the nearby cabin in the woods.

The Leo man’s mood, due to the circumstances, is not in the best shape during this month; the first three weeks are like a trial by fire for him, and he’ll have to use all of his strength to keep a clear head on his shoulders.

The end of the third week and the entire fourth week are game-changers for him, and he’ll fall into a better headspace and have much brighter thoughts and feelings.

This month is a good time for getting to know that darker side of him, so that you may know the second side of the coin of his personality.

If you are still having doubts about the state of your Leo man or feel as though your relationship can use a little bit of a boost, then you might want to book a VIP consultation with me to solve your burning questions.

This way I can dig deep into your unique situation and you can come out on the other side feeling more connected than ever. I’ve reserved some spots for my readers, so if this feels like a call you need, book your consultation with me here.

Until next time, my lovely readers – I wish you all the luck in the Universe on your journey!